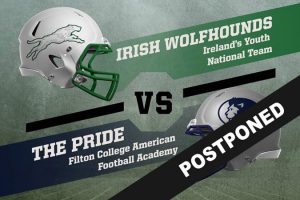 Unfortunately, due to the severe weather conditions expected from Storm Lorenzo, and its impact on travel and the game itself, we have to reluctantly postpone this game to a later date.

We apologise for any inconvenience caused but will inform as soon as we can schedule a new date for this fixture. 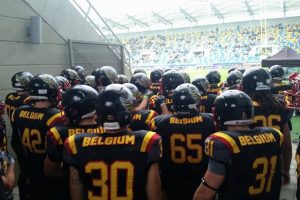 The Irish Wolfhounds are pleased to announce the return friendly fixture with the Barbarians in Belgium on Saturday 7th September 2019 (venue to be confirmed).

The Wolfhounds are looking forward to the trip and another step towards the development of Irish football in the International arena and playing in the European competitions.

Alan Orr (Wolfhounds General Manager): “We are delighted to be travelling to Belgium to play the Barbarians in this return fixture and look forward to meeting up with the coaches, staff and players again. I’m sure this will be another gripping game, which went right down to the wire in Ireland and I am sure the Barbarians will be hungry for the win in preparation for their IFAF qualifying games.”

Due to massive interest in participation in the Irish Wolfhounds’ upcoming sessions we are no longer accepting video highlights from players.

The Wolfhounds coaching staff will be announced following the Shamrock Bowl.

Joint Training Sessions for the Senior and U20 Irish Wolfhounds will take place at the NSC (National Sports Campus) on the following dates:

Times and details will be announced closer to these dates.

We will be adding to both squads as coaches select players who have impressed throughout the 2017/18 seasons.

Time factors prohibit traditional try-outs in the run up to this game. Try outs will be part of the Team Ireland schedule for 2019. We welcome players sending highlight reels from 17/18 only to [email protected] 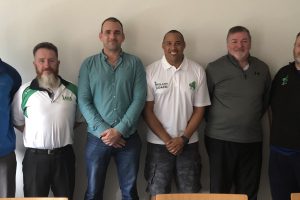 The Irish American Football Association (IAFA) are delighted to announce the return of National Team Program following a 2-year hiatus. As part of that, the Irish Wolfhounds will take on the Belgian Barbarians in an International match on October 20th.

Ireland Head Coach Ciaran O’Sullivan spoke about today’s announcement, “Yeah, there’s a lot of excitement around. Its been building for a while now. We’ve been working on it since start of the year so it’s great to see everything’s signed sealed and delivered. To see a full International game in Ireland and against really good opponents, is an exciting time for football here in Ireland.”

National Team General Manager Alan Orr said, “Yeah, we’re really looking forward to the challenge. The Barbarians are a good team. We’ve played some of their club members through the Atlantic Cup, so this is really a fresh start for the National program to start with Belgium in an international friendly. We’re already committed to a return fixture. So at the moment yes, we’re just getting everything in place and getting the program up and running and looking forward to playing a good quality game.”

It’s exciting for everyone involved getting the National Team Program back up and running, and the Wolfhounds will be playing more more quality fixtures in the years ahead. Orr sad, “Yeah, very much so. This is a 3-4 year program at least, we’ve already have the Under-20s playing at high school team last April so this is a continuation of this.”

“We’ve already lined up games for the under 20’s for next year and we’re just waiting on confirmation. Obviously I can’t say too much other than until everything’s signed and sealed. Our aim is to at least have three fixtures next year for the under 20’s and potentially 2 for the senior team.”

Belgian National Team Head Coach Spencer Wood is really looking forward to bringing his team to Ireland, “There is tremendous excitement surrounding our trip to Ireland – anytime you can schedule a quality friendly game on the road is always exciting. We’re very much looking forward to the Irish hosting us and experiencing a bit of their culture, both on and off the field.

Wood has taken over the coaching duties from Lee Rosky, who stepped down after 4 years in charge at the end of last year. He said of his side, “We are stepping into a new era of Belgian football as we have several new faces on both the coaching staff and the roster this year. New offense, new defense, new culture. We were fortunate to come into a good situation here where the national team program had already experienced some success in recent years. I can’t guarantee what you’ll see from us in this game, but what I can say is that we will be fast and physical. American football in Europe is constantly progressing, and we are happy to be on the upward trajectory as well. It’s a tremendous experience for our players to see and compete against varying levels and styles of football.”

Both kick-off time and venue will be announced at a later date.